Sunday's Marathon Project race in AZ is the same, only different, and very exciting 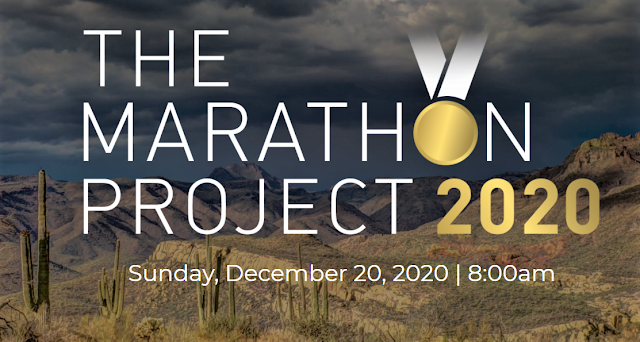 difference. It’s a knockoff of Eliud Kipchoge’s two “exhibition” races. It’s entrepreneurial and profit-centered, but not profit-making. Most of all it’s a holiday gift to North America’s top marathon runners and the fans who enjoy following them.

I’m surprised by how much it has intrigued me. I’m eager to watch both the live stream (10 a.m. Eastern time Sunday) on USATF.TV+ (subscription required), and the 90-minute taped replay at 7:30 p.m on the NBC Sports Network.

On the surface, the Marathon Project (MP) has many parallels with the Kipchoge extravaganzas (Nike Breaking2, and Ineos 1:59 Challenge). It’s got a small, limited field; pacers; a flat, loop course; and ideal weather. Some of the entrants have said they’re running “to win,” but that’s mostly smoke. They’re running for fast times. Follow the money.

The MP is different from Kipchoge’s exhibitions in one key way: It’s sanctioned and record eligible. If anyone runs fast, their times will be accepted by World Athletics and USATF. On Thursday morning, course-layout veteran David Katz was adjusting several hairpin turns into more rounded affairs, and certifying the course distance.

However, the biggest difference between the MP and prior time-trial events is the business structuring. Kipchoge had billion-dollar companies enticing him to the start line. They wanted him to run fast, sure, but mainly they wanted to attach their names to a huge sports-marketing opportunity.

Kipchoge would not be Roger Bannister running 3:59 in near isolation at Oxford’s oddly-named Iffley Road Track. When Kipchoge ran, the world was watching.

The world won’t be watching Sunday morning. The MP is funded by runners for runners. No one’s got a marketing budget. This is a DIY deal, new and novel. That’s one of its attractions.

The race has one simple goal: to help a handful of runners make enough money to continue their training through another 4-year cycle leading up to the 2024 Olympics. Many have contracts that expire at the end of this month--the end of the prior Olympic cycle (2017-2020).

The MP was set in motion last summer when Ben Rosario texted Josh Cox. Rosario, coach of the HOKA NAZ Elite team in Flagstaff, AZ, was coming to realize that his runners would have no big races in fall 2020 or spring 2021. “We’ve got to do something for our marathon runners,” Rosario said to Cox. Both are former elite marathoners who retired without reaching the Olympics or the highest ranks of their sport. They would like to help others succeed where they didn't.

Cox is also athlete agent to a number of runners entered in Sunday’s MP. He agreed with Rosario. The more the two talked, the more reasons they saw for a December event. They brought on Matt Helbig, a St. Louis running-store owner, experienced race-management hand, and longtime friend of Rosario’s.

The three formed a private company, and kicked in roughly $30,000 apiece. To date their expenses are “north of $175k,” Cox told me in a lengthy email. That’s not a key number. Much more crucial: How about the revenue side of the equation?

The MP couldn’t allow large-scale participation … with accompanying entry fees. It has very rigid Covid restrictions in place. It couldn’t claim anyone was going to break 1:59. It couldn’t even claim a field of Olympians. None of the U.S.’s six qualifiers from the Atlanta Marathon Trials are expected.

Cox tried to rustle up some sponsors, but it wasn’t easy. Brooks came on board a couple of weeks ago; the company is a solid supporter of American runners. On Wednesday, Rosario said several more sponsors would be announced before Sunday.

Also on Wednesday, through a Zoom press conference, the organizers announced, for the first time, that they would be able to offer prize money of $5000, $2000, and $1000 for the podium finishers. Rosario apologized for the small sums: "That was all we could squeeze out," he said.

That’s why I chuckled to myself when the top men--CJ Albertson, Cam Levins, Scott Fauble, Martin Hehir, and Jared Ward--proclaimed that they were racing for the win. Right. And so am I. Who doesn’t want to win?

In fact, the prize money represents only a small fraction of the possible time bonuses on the line. Josh Cox puts this number in “the hundreds of thousands” for Sunday’s race. The top runners have contracts that reward them for reaching ambitious time goals. Ergo, in Sunday’s MP race, time counts more than finish position.

If the guys are smart, they might self organize into one of those triangles that paced Kipchoge. It doesn’t matter who wins. It could matter a lot if several runners can get under 2:09. And the best way to do that is to fight together like the three Musketeers.

In the women’s race, Sara Hall has set herself a near-impossible task. She wants to run under the American record, 2:19:36, and will have a first-half pacer (69:40) to nudge her along. You could call this brave or foolish, given her current best, 2:22:01. I’ll call it “financially aware.”

No one has told me the following, but here’s a likely scenario. Hall is at the end of a 4-year Asics contract. Among other things, it contains a handsome bonus for making the Olympic team; she didn’t. There’s also a big bonus for setting an American record in the marathon; she still could … on Sunday.

Hall is 37.5 years old, doesn’t know what her next contract might look like, and realizes she probably won’t get any faster than she is in 2020. It’s now-or-never time for her. She sets the marathon record Sunday morning, or it doesn’t ever come her way.

It seems unlikely that any of the other women entrants will follow Hall’s pace. She’s got reason to run solo, where the men have reason to run together. Hall will chase the record, hoping for the kind of day that could send her daughters to the best colleges. At least that's what I would do in her situation. It will be thrilling to watch--also nail-biting and perhaps agonizing.

Keira D’Amato could go all-in and chase Hall, but it seems unlikely. On Wednesday, she wasn’t yet sure what shoes she’d be wearing. Translation: Her agent was trying to put together a shoe contract for her (she doesn’t currently have one), with time bonuses included. She ran her PR, 2:34:24, at the Marathon Trials. She can run much faster.

This week Josh Cox acknowledged to me that he’d be making a small profit on the MP race -- at somewhat less than the hourly rate he pays his babysitters. I wish the number were bigger. Then other risk-takers might be more willing to take a chance on other innovative events. We could use more.

I’m not sure there will be an MP2, and I’m not sure we’ll need one--not if the marathon world has returned to something close to “normal” in nine months or so. I only know that Sunday morning will be more exciting than I had expected it to be. There are a lot of good story lines here. It will be fun to watch.

And if someone makes a little money, well, that’s a good thing for all.