LEADING UP TO THIS YEAR'S 50th RUNNING of the New York City Marathon on November 7, I figured 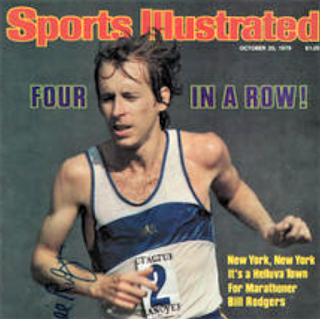 someone would surely write about the Marathon’s “Top 10 Moments.” But I didn’t see any such article, so I figured I should do it myself, even if after-the-fact.

Each of the Top Moments noted below was chosen by someone who herself or himself has had an important impact on the New York City Marathon. The Moments are listed in chronological order.

From 1958 to 1969, New York City had only one annual marathon--a rather gritty midwinter trek along the Harlem River in the Bronx, near Yankee Stadium. This Cherry Tree Marathon attracted little to no attention. Things changed in 1970 when Fred Lebow staged a new race in the city’s green jewel, Central Park, naming it the New York City Marathon. Now the NY Times wrote about the upcoming race, which allowed Lebow to proclaim, “We’re giving out 10 watches, 35 beer mugs, and commemorative medallions to all finishers.”

No wonder 126 men and one woman showed up on September 13. (Nina Kuscsik dropped out but then won the following year, and was first female finisher in the 1972 Boston Marathon, the first time Boston gave official numbers to women.) New York firefighter Gary Muhrcke won the 1970 NYC Marathon as he had the 1969 Cherry Tree. Bill Rodgers met Muhrcke a few years later when Rodgers entered the Central Park 26-miler, drawn by the first-prize trip to Greece on Olympic Airlines. He finished fourth. “That’s when I learned how grueling the Central Park course was,” says Rodgers. “Gary always had a smile on his face, and seemed to epitomize the friendly spirit of running. But he was a really tough runner to handle four loops around the Park the way he did.”

Bill Rodgers won the first 5-boro NYC Marathon in 1976, as well as the next three in a row, helping to establish the event’s global significance.

No one’s precisely sure how the innovative, expansive 5-boro course came to be, but Gary Corbitt quotes from a letter his father, Ted Corbitt, sent to George Spitz, a major promoter of the 1976 Bicentennial Marathon in New York: “It is clear that you brought up the idea of staging a race in NY City worthy of the ‘Big Apple,’ and I responded that the most unusual race would be a sweep thru all five boros.” Hirsch remembers media interest in the first true city-wide race, and how the 1976 NYC Marathon represented the “passing of the torch” from second-place finisher Frank Shorter to winner Bill Rodgers. Also, it marked the birth of big time urban marathoning, soon followed by London and then literally hundreds of world cities.

Gary Corbitt is a running historian who specializes in Black running history. George Hirsch is chairman of the board of New York Road Runners.

Grete Waitz entered and won her epic first New York City Marathon in 1978, and would eventually win 9 times. But she didn’t lead all the way. America’s Marty Cooksey hit the halfway point in 1:17:45, more than 100 meters ahead of Waitz. Cooksey had run a 2:46 the previous spring and was now attempting the impossible--a 10-minute improvement. She didn’t make it, collapsing twice near the end, and literally crawling across the finish line in second place, 2:41:49. Patti Dillon was there watching. “Marty made me realize that I had to train harder, and race to the edge of collapse,” Dillon says. Two years later, she ran 2:29:33 at New York, becoming the first American female to break 2:30 in a marathon.

When Waitz crossed the finish line in 1978, the awaiting media bellowed: “Who is number 1173?” They didn’t have to repeat the question when she won again the next year in 2:27:33. In fact, Waitz jumped from the sports page to the editorial page. The New York Times’s editors used her performance to support a women’s marathon in the Olympics, writing: "Never mind that Mrs. Waitz's 2:27:33 would have beaten half the male Olympic marathon winners, and all the men who ran in the 1970 New York City Marathon. The Olympics still do not recognize women who run the 26 miles." Five years later, Waitz finished second to Joan Benoit Samuelson in the 1984 Olympic Marathon.

Gloria Averbuch worked for many years with the New York Road Runners Club and co-authored three books with Waitz.

1992--Despite cancer, Fred Lebow runs and finishes his own race

The race director and all-around NYC Marathon impresario since 1970, Lebow had never run his own marathon, by now arguably the most famous in the world. He developed brain cancer in the early 1990s, but was in remission in 1992, so he began marathon training by doing laps in the hospital hallways. When he announced that he was going to enter the marathon, Grete Waitz said she would accompany him. They finished hand in hand, both with tear-filled eyes, in 5:32:34. “Fred looked like death at the start line,” remembers Gary Muhrcke. “At 16 miles, you could see him coming to life. At the finish, he looked a million times better than at the start.”

On September 11, the Twin Towers fell, sending New York and the entire world into shock. It seemed unlikely that the NYC Marathon could be held that fall. But the city developed a “United We Run” theme, and more than 23,000 marathoners thronged to New York to support that effort. With 2800 police in the streets and a “no fly” zone overhead, the race went off untroubled. “It was a moment that made clear just how big and meaningful a place the New York City Marathon had come to hold in the heart not just of New York, but really of the world--representing strength, resilience, and interdependence,” remembers Richard O’Brien.

2005--Paul Tergat beats Hendrik Ramaala by less than a second

Marathon racing gets fiercer every year, but it’s hard to find a race closer or more exciting than the men’s finish at NYC in 2005. South Africa’s Hendrik Ramaala had won the previous year. Kenya’s Paul Tergat was an acknowledged super star on the track and in cross-country, and already the world-record-holder (2:04:55, Berlin 2003) in the marathon. But this was his first start in the challenging NYC race. Over the last several hundred yards in Central Park, the two ran essentially side-by-side, exchanging small leads. Tergat had the finish-line advantage by an improbable .32 seconds--2:09:29.90 to 2:09:30.22. “It was an incredible example of actual racing head to head,” says Peter Gambaccini. “I was with the press corps watching, and the tension was incredible.”

Meb Keflezighi ran his first NYC Marathon in 2002, finishing a disappointing 9th, and four years later fell back to 20th. But Meb kept returning, and in 2009 he got everything right. He became the first American winner since Alberto Salazar in 1982. “Seeing Meb win in 2009 was my most memorable New York City moment,” says Deena Kastor. “He ran calmly until he got to Central Park when he made his breakaway move. When Meb ‘commits’ to the finish line, he doesn’t lose. He broke the tape wearing a USA singlet, and showed how his resiliency through the years paid off.”

Deena Kastor holds the American record in the marathon (2:19:36), and won a silver medal in the 2004 Olympic Marathon.

2013--The Marathon bounces back from Hurricane Sandy and reaches 50,000 runners

The fall of 2012 and the spring of 2013 represented the darkest six months in marathon history. First came the last-minute cancellation of the 2012 NYC Marathon due to Hurricane Sandy, then the next April came the bomb explosions near the Boston Marathon finish. Everyone held their breath, wondering what might be next. Against this backdrop, the 2013 NYC Marathon forged ahead--careful, aware, watchful, and, yes, a bit apprehensive. Not that you could sense any fear among the runners. For the first time ever a marathon attracted more than 50,000 runners (50,740) and an almost absurd number of them finished, 50,062. That’s 98.7% “We were inspired to come back strong for New York City, for Boston, and for everyone in the worldwide running community,” says Mary Wittenberg.

Mary Wittenberg was the first female race director of the NYC Marathon, serving 10 years from 2005 through 2014. 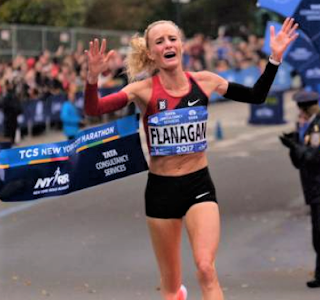 In her first NYC Marathon in 2010, Shalane Flanagan finished second overall--the highest placing by an American woman in 20 years. Seven years later, in only her second NYC Marathon, Flanagan soared all the way to the top. She broke the tape in 2:26:53, becoming the first American winner since Miki Gorman in 1977. The next spring, Des Linden won Boston, making her the first American winner there since 1985. Something important seemed to be happening. “Shalane’s win in New York was really significant because she broke a mental barrier for American women who had come to believe they could not compete against global women,” notes Kathrine Switzer. “Now little American girls are almost as eager as little American boys to become heroic athletes.”