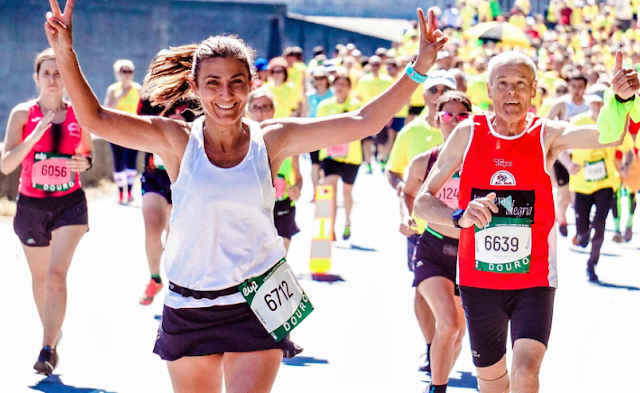 As first-time marathoners flooded into the sport over the last 25 years, some observers worried that their inadequate preparation might leave them with heart damage and/or other problems. Indeed, one early study showed that marathon finishers who trained under 35 miles a week had nine times more troponin leakage--a measure of heart-muscle injury--than those who trained over 45 miles a week. While the authors stated “There is no data to suggest that there are long-term sequelae,” the troponin finding looked ominous.

Now a new British report based on a group of London Marathon runners seems to lay the heart worry to rest. It shows that first-time marathoners who run roughly 25 miles a week in training enjoy a modest reduction in blood pressure and “no evidence of myocardial fibrosis [scarring] or persistent edema” after completing a first marathon in an average time of 4:31.
The research team, including London Marathon medical director Sanjay Sharma, concluded: “Despite ongoing concerns regarding the cardiovascular safety of marathon running … we found no evidence of myocardial injury in first-time marathon runners achieving an average finishing time.” A free full-text version of the paper is available here from Frontiers in Physiology.
To investigate potential heart harms of a first marathon, the researchers gathered and tested 68 novice marathoners six months before the 2016 London Marathon and two weeks after. All subjects received an exercise performance test, as well as extensive heart measurements, including electrocardiography and a heart MRI.
Subjects were young by design, with an average age of 30, so they were unlikely to have underlying atherosclerosis. Thirty six were men, and 32 women. All but two of the 68 runners completed the marathon.
The runners were advised to follow the London Marathon’s 16-week training program for first-time marathoners. Since a third of them wore personal digital tracking devices when running, they were able to provide objective evidence of their actual workout compliance. These training logs revealed that the runners did 78 percent of the suggested mileage.
This amounted to about 2.5 hours a week of training (about 15 miles) at the outset, and about 4.5 hours (roughly 25 miles/week) at peak training three weeks before the London Marathon.
The male subjects finished London in an average time of 4:14:30 and the women in 4:43:40. This was slightly slower than London’s overall average finish times among runners who presumably trained more, but were also likely 5-10 years older.
The pre-marathon and post-marathon testing revealed no heart damage, as noted. It also showed that the runners’ average blood pressure had dropped by 4 points (systolic) and 2 points (diastolic). The paper noted that this is “comparable to the effects of antihypertensive medication,” and would likely reflect an 11 percent lower risk of stroke and 7 percent lower risk of heart disease in a young group with an already low risk profile.
Somewhat surprisingly, the runners showed no increase in basic fitness post marathon training as measured by vo2 max testing. This could be, the study team speculated, because the runners were still not fully recovered from their marathon effort.
It’s likewise possible that the runners’ unsupervised training was so modest that it simply didn’t increase their cardiovascular fitness, which generally gets the biggest bang from relatively fast running. The runners also showed no change in pre- and post-marathon BMI (average, 23.5) or body fat percent (average, 22.5 percent).
The study team noted two other post-marathon changes with possible benefits to the runners: They had lower “aortic pulse wave velocity” and a lower level of blood creatinine. The first is a measure of artery flexibility vs stiffness. “The lower the aortic pulse wave velocity, the more elastic, healthy, and youthful the artery,” explained first author Andrew D’Silva, a London-based cardiologist. “The higher it gets, the stiffer the arteries, which can happen in ageing but also through disease processes like high blood pressure and diabetes.”
Creatinine is a measure of kidney strain or injury. Some previous marathon blood-test analyses, performed immediately after the finish, have revealed high levels of creatinine. This presumably results because the kidneys have to work overtime to clear the byproducts of muscle-breakdown. The new study didn’t draw blood until two weeks post-marathon, when subjects’ creatinine was lower than six months pre-marathon.
“This drop in creatinine that we observed may mean that kidney functioning was enhanced by 17 weeks of regular running, and not impaired,” said D’Silva.
D’Silva believes the new study makes an important contribution precisely because it monitored “typical first time marathon runners” who aren’t motivated enough to follow a serious-runner training program. If anyone were likely to suffer heart damage while marathon running, it would be an under-prepared crowd. But this didn’t happen.
Instead, D’Silva observed: “The runners got beneficial improvements in the blood vessels (blood pressure, aortic pulse wave velocity) and no sign of heart damage.”
Email ThisBlogThis!Share to TwitterShare to FacebookShare to Pinterest
Newer Post Older Post Home