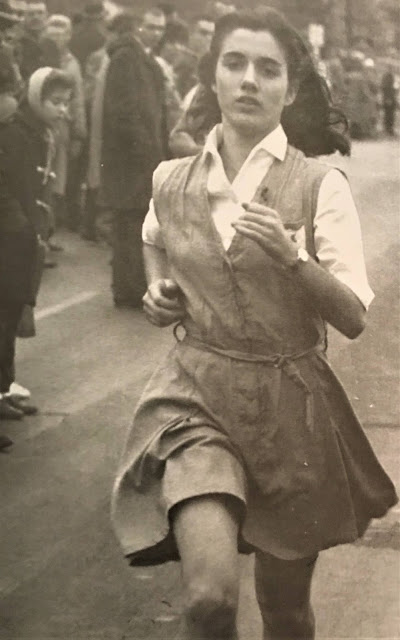 BY RICK DYER
Welcome to everyone. And thank you for your support of the Manchester Road Race, which celebrates its 83rd running on Thursday.
This is the tale of three runners. Their names are Chase, Close and Kujala.
One was the first woman ever to complete the Manchester road race course. One was the last Manchester athlete to win the thanksgiving day road race. And one, well . . . He was always just plain last.

Each of these athletes played important roles in the history of our annual thanksgiving day run. But more importantly, their stories can hopefully offer us some important lessons---not only about the sport of running, but also about life itself.

Julia chase grew up in the Groton area. As a kid she’d sometimes run a mile or so to school. Olympic marathoner Johnny Kelley lived in her town, and she would often see him practicing on the roads. Kelley was a six time Manchester road race winner and he became Julia’s mentor and encouraged her interest in running.

Even though there weren’t yet high school teams for girls, Julia won the New England A.A.U. women’s half-mile championship. Prior to the 1970s, women were prohibited by A.A.U. rules from competing in races with men, and from running in any event longer than a half mile.

Julia attempted to run at the 1960 Manchester road race, but was turned away. So she came back in 1961, when she was a 19-year old sophomore at smith college. Julia had mailed in her entry weeks before the race. And she notified the media that she was going to run in Manchester’s turkey day five miler. Remember, this was more than a decade before the title nine laws were enacted. It was unheard of back then for a female runner to run with the guys in a long distance road race.

When Chase and two other female runners showed up on main street in 1961, there was a great deal of excitement. There were also a lot of media people in attendance, including a photographer from life magazine. Race officials again told chase and the other women athletes that aau rules prohibited them from running. They were denied numbers.

But when the gun sounded, Chase and the other two women lined up at the back of the pack and ran the course anyways. Julia Chase was the first women to cross the finish line. She completed the race in 33 minutes and beat nine men that Thanksgiving. The following week, LIFE magazine published a big photo feature about the day that Julia chase toppled the gender barrier in Manchester, Conn.

Julia chase went on to earn her medical degree and practiced psychiatry in new jersey and Connecticut for many years. Her gentle act of protest in 1961 worked. It didn’t happen overnight, but thanks in large measure to her, the A.A.U. rules were subsequently changed to allow women to compete against men, and to run all distances. Last year, more than 12,000 runners registered for the Manchester Road Race. Half of them were females. 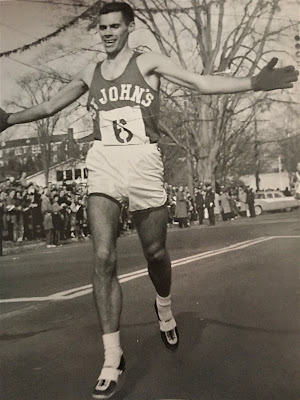 Peter Close grew up in Manchester and attended Manchester High School. He was a skinny high school sophomore in 1952 when he first ran in the Manchester Road Race. Close placed 32nd in a field of 43 runners that Thanksgiving with a time of 30:45.

But Close loved to run, he practiced very hard, and he had a goal: he was going to win his hometown road race. Close finished 11th at the road race in 1953 and 10th as a high school senior, in 1954. He won a track scholarship to St. John's University, and came home every Thanksgiving to run in Manchester. Pete placed fifth in 1955, 10th in 1956, and he was second in 1957.

In 1958, his senior year at St. Johns, Close finally realized his dream. He won the road race with a time of 24:43. It has been a long grind for me since i was 32nd seven years ago,” he told Manchester Herald sports editor Earl Yost after the race. “This is one of my biggest victories."

Pete Close joined the marines after college and he competed in the 1500 meters for the United States at the 1960 Rome Olympic Games. He later served as the sports information director at M.I.T., and as the head track coach at Tufts University. His victory 61 years ago marked the last time a Manchester runner won the Manchester road race.

Amos Kujala was an older runner who ran in 15 road races a year throughout New England during the 1940s and 50s. Born in Finland, he was a farmer and a stone mason from Harvard, Mass. So what made Amos famous? Lots of last place finishes at the Manchester road race.

Kujala competed in the Manchester Road Race thirteen times between 1946 and 1959. He usually placed dead last, or darned close to it. The fans loved Kujala and cheered for him as enthusiastically as they did for the winner. They knew that the road race just wasn’t over until old Amos ambled down main street. 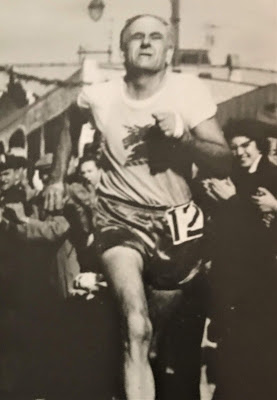 Here is what six-time Manchester champion Johnny Kelley had to say about Kujala: “I knew Amos when i was a boy entering the road racing game and he was an old-timer shuffling through New England’s April through November calendar of week end contests, with no pretense of finishing anywhere but a radiantly beaming. Dead last. He was a worthy man.”

Amos Kujala ran in Manchester for the final time in 1959. He finished the race with a time of 52 minutes, last in a field of 115 runners. His leg was amputated in 1961, and he died two years later.

Chase, Close, and Kujala obviously came to the Manchester Road Race from different backgrounds, and with varying degrees of athletic skill. But I believe they shared two important common denominators that made them exceptional.

First, they each had tremendous passion for running. They loved their sport. They weren't running for tee shirts, or the bling. They competed because they found personal rewards and benefits in doing so that were much more valuable than any medal or trophy.

Secondly, they were persistent. Julia Chase had the door shut in her face twice. But she had the grit and courage to keep coming back. And she refused to take no for an answer. She eventually unlocked that door, not only for herself, but for thousands of women who followed in her footsteps.

Pete Close finished near the end of the pack in his first race. It might have been tempting then to switch to another sport. But he kept at it, and eventually won the Manchester Road Race, and became an Olympian.

Amos Kujala competed in road races every week for years against men who were much younger and faster than he was. He knew, with almost absolute certainty, that he’d probably be the last person across the finish line. But like the Energizer bunny, he just kept on running.

So there you have it, the tale of three runners. Chase, Close and Kujala: they were athletes who in their own unique ways made history at the Manchester Road Race. You can chase after your goals and dreams.
Pursue those things that you love. Do them for the sheer joy that comes with the knowledge that you always tried your hardest, and always did your best. I wish you much success!