Sorry, Nike, I’m not a fan of that new Shalane Flanagan ad. In fact, when I saw it at the front of the Jan/Feb Runner’s World magazine, I ran to my wife’s home office, and shoved it in front of her. 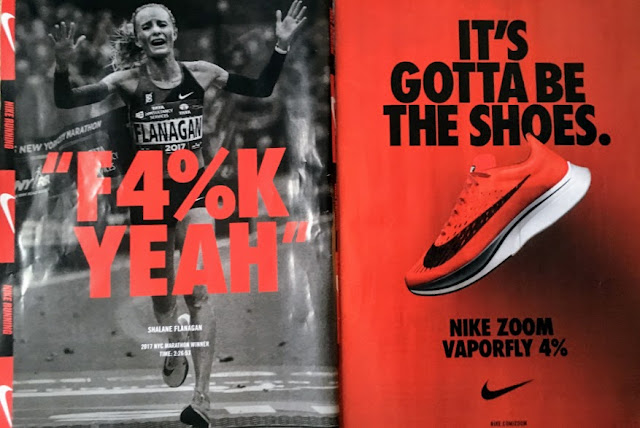 My wife stared at the pages for a moment or two.
“Careful,” she noted. “Nike might be playing with you. I think the ad could be tongue in cheek.”

I don’t think so.

However, my wife is probably right. Nike ad wizards have been messing with the athlete-shoe connection at least since 1989 when Spike Lee and Michael Jordan first came together in a famous “It’s Not About The Shoes” campaign.

Still, I don’t like the new ad. Here’s the difference. Michael Jordan was a globally famous basketball player in a sport drowning in media attention. No one had to be told that there was anything special about him.

While Shalane’s well-known in running circles, there are a lot of things people don’t know about her. Even Runner’s World subscribers. So Nike should have done the right thing by filling in important background details, and praising Shalane to the skies. Instead, we got attitude or shoe promotions or something else. Noticeably lacking, the most important word of all: "Congratulations!"

Here’s what I think Nike should have said in the ad:

“Congratulations, Shalane. No one could have deserved that New York City victory more than you.’

“Congratulations for holding to your dream of a major marathon win, and not giving up.

“Congratulations for noting that you wanted to win for Meb on the day of his final marathon.

“Congratulations for saying that you hope your victory taught a lesson of patience to today’s young runners.

“Congratulations for persisting when you finished just outside the winner’s circle in several other major marathons.

“Congratulations for not quitting the sport despite its doping woes and several times “losing” places to runners later revealed as drug cheats.

“Congratulations for not letting a spring 2017 injury crush your goals for later in the year. Yes, you had to miss the Boston Marathon, but you sure made up for it in New York.

“Congratulations for sticking with your coach, Jerry Schumacher, and believing in his program.

“Congratulations for always praising your training partners like Kara Goucher, Amy Cragg, and others. Not to mention the male members of your longtime Bowerman Track Club team. No runner is an island.

“Congratulations for listening to your parents, great runners in their own rights. They never forced you into running, but only supported your interest in active sports. You began running on your own terms. And have continued that way. Passionately.

“On a week when New York City was rocked by a terrorist act [a truck driver killing eight pedestrians], congratulations for having the presence of mind to compose this compelling, spontaneous thought at the post-marathon press conference: “Athletics is a great way to make people feel good and to smile, to kind of forget about some of the negative things in the world. Before this race, I absolutely was thinking about how this had been a tough week for New York, and I could relate to it because I was in the Boston bombings of 2013.”

"Congratulations for thinking of others as well as yourself.